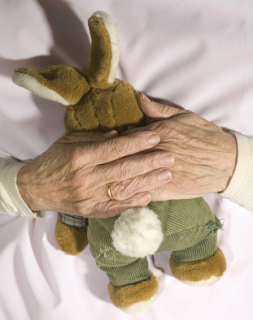 It has now been over 18 months since her mother passed away after years of suffering from Alzheimer’s disease, but when Samia Gedeon Talhouni speaks about her mother’s descent into Alzheimer’s, the pain of dealing with such an illness is still all too apparent.

Samia first noticed something was wrong when her mother, Anisseh, who was in her seventies at the time and living in Ramallah in Palestine, started repeating the same questions and forgetting things. “From that point on, it all went downhill,” recalls Samia.

Anisseh started suffering from memory loss. She could no longer remember names and places and was constantly misplacing and losing things. She lost her ability to complete familiar tasks, such as calculating and handling money. Her personality and even mood changed—she became more aggressive. “She became frustrated,” remembers Samia, “because she knew there was something wrong.”

Course of the disease

Anisseh’s mental deterioration took place gradually, progressing for almost four years before the Alzheimer’s took hold completely. Then, her condition got particularly worse while she was visiting her daughter in Jordan. “She didn’t know where she was, but kept saying that she wanted to go home over and over again,” Samia says. “I don’t even know if she knew where home was.”

Over time, the neurological disorder took its toll—not only on Anisseh herself, but on the family as well, who were, at the time, grieving for a brother who was dying of cancer.

“When I looked into my mother’s eyes, all I saw was emptiness; a dead stare.” It was greatly disturbing for Samia that her mother no longer recognized her and she found it difficult to come to terms with.

Samia’s sister, Muna Gedeon Sawalha, says that watching their mother’s deterioration was agonizing. “It was very painful all through the period of her deterioration. It was hard to see her go from energetic to bed-ridden and confused.”

Making things even worse for the family was that, at the beginning, doctors were unsure of Anisseh’s diagnosis; it was only after the disease had progressed that doctors were able to confirm it as Alzheimer’s.

Alzheimer’s disease is a progressive and fatal brain disorder named after German physician Alois Alzheimer, who first documented it in 1906.

According to neurologist Dr Youssef Oreikat, Alzheimer’s disease is the most common type of dementia associated with old age. “It is not an inherited or genetic disease and it is incurable,” he clarifies. “The patient’s intellectual function becomes completely absent.” Doctors believe the disease to be caused by a build-up of protein E in the brain, which damages nerve cells and causes a steady decline in memory and

Alzheimer's disease is not part of normal ageing, but one’s risk of the contracting the disorder does increase with age.

Although the disease was entered into medical literature in 1907, it was only put under the spotlight a couple of decades ago, when US President Ronald Reagan announced that he had the condition. It slowly destroyed Reagan’s mental capacity and he was isolated in his home with close

The general progression of Alzheimer’s is divided into three stages, with various symptoms characterizing each one:

Stage 1: The symptoms in this stage are usually mild and can include:

Routinely losing things or misplacing them.

Noticeable changes in personality or mood.

Stage 2: At this stage, the disease is classified as moderate. Symptoms can include:

Stage 3: This is the final and most devastating stage. Symptoms can include:

Loss of the ability to feed and dress oneself.

Loss of the ability to control bodily functions, such as

Patient becomes vulnerable to other illnesses and infections.

Alzheimer’s is detected through a behavioral assessment, laboratory tests and brain scans. Although there is currently no treatment available, doctors sometimes prescribe medication to alleviate the accompanying symptoms and improve the patient’s quality of life. Mental stimulation exercises—simple mathematical problems, for example—can also help the patient better handle Alzheimer’s.

Providing care for a person with Alzheimer’s is both physically and emotionally demanding. Samia and Muna remember their mother’s rapid deterioration: “She needed 24- hour care; she became completely helpless and started losing weight until she stopped eating,” Samia describes, “but I knew that all she needed was love and a feeling of security.” Samia explains that she would leave the television on a channel that played music her mother loved as a source of comfort and relaxation.

Muna used to speak to her mother, and constantly took her children to visit their grandmother. “All we managed to give her was moral support. I think that we did our utmost to keep her happy and comfortable.”

Both sisters agree that there was nothing to be done—no doors to be knocked and no cure to be found. Their only consolation is that they managed to spend a lot of time caring for their mother and helping her feel as secure as possible.

“She passed away at the age of 82. I’m so glad we were there for her. In such cases, you try to give as much as you can,” Samia concludes.

As for Muna’s advice to families that are living with a member suffering from the disease, she says, “Be patient, supportive and do not expect miracles.”

Posted by Flavour of the Day with Laura Haddad at Sunday, January 23, 2011 0 comments