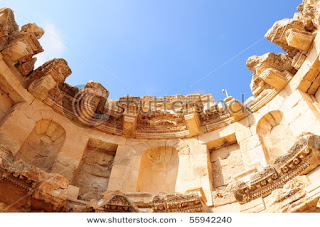 Bring your kids to The Children's Museum October 16-17 for a fun-filled, interactive workshop to learn about prehistory!

"In a country like Jordan which is situated in a region with one of the most ancient prehistory and archaeological ruins of the world we found it very instructive to hold this activity here with two objectives: that children get to know the progress of mankind and to do so with the awareness that Spain is a country with great researchers and archaeologists specialized in this field."
-Instituto Cervantes in Amman

Also Instituto Cervantes in Amman, the Atapuerca Foundation and the Embassy of Spain are for the exhibition Rainbow of Prehistory, in which the artist Fernando Fueyo illustrates the route of humanity from its ancient origins. This exhibition is from 16 October until 15 November.

Fernando Fueyo was born in 1945 in Spain and he is considered one of the most important illustrators of the Spanish nature. He collaborates with some magazines also. He has exhibited in Japan, Germany or Portugal. In this exhibition he exhibit watercolour paintings about the archaeological site of Atapuerca in Spain (you can find information in this web: http://www.atapuerca.org/ ).

Email ThisBlogThis!Share to TwitterShare to FacebookShare to Pinterest
Labels: Events