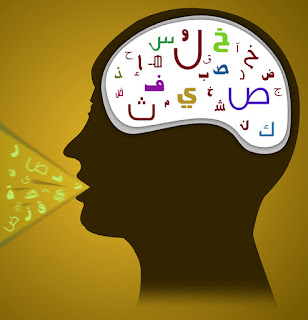 I attended a workshop organised by Yousef's nursery covering the importance of language in a child's development and literacy, specifically Arabic. For the first time in a really long time, I found someone who feels as strongly about the topic as I do! I am constantly surprised by the amount of people who disregard this issue and choose to only speak English with their children. And what's even more annoying is that in many cases it is broken English!

My job is to write in English, however, Yousef (2 years-old) only started speaking it a few months ago after we got a helper who speaks only it. Other than that, I make it a point to speak, read and in many cases watch Arabic shows. To me, it is our mother tongue and identity.

Many people use the difference between the spoken Arabic "a'amiya" and proper Arabic "fus-ha" as an excuse to why their children are weak in Arabic or do not like it. But, what I learned today is that all of us are making excuses for our own disregard of the matter. As the presenter explained today, in the first few years of a child's life, he is capable of learning SEVEN languages. Consider spoken Arabic "a'amiya" and proper Arabic "fus-ha" two languages and put EXTRA effort into teaching him/her to speak it; just do something about our disappearing language!
Posted by Flavour of the Day with Laura Haddad at Wednesday, November 21, 2012