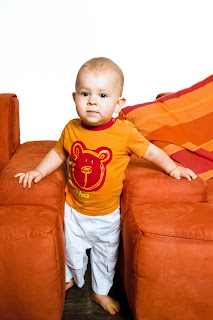 Will my baby learn how to walk on his own?
Yousef is my 13-month-old son who has been crawling since he was 9-months-old.
Since Yousef was a colic baby and had a number of digestive problems until he was about 4-5 months old, it took him a bit of time to catch up with babies his age. For example, he only learned how to support himself in a seated position when he was 7-months-old (some consider that very late).
On the other hand, he has always been a very active baby: kicking, playing and lately, crawling everywhere. In fact, the only time he is in his place is while he is sleeping.
While he does grab on and bring himself to a standing position, as well as moves from one end of the couch to the other by stepping sideways, he still does’t attempt to go from one object to another no matter how close they are. He also doesn't know how to stand unsupported.
I got some advice which I am not very sure of. Someone told me that I should put a table in the middle of the room as an incentive for him to move from the couch to the table. On the other hand, I moved the table in the first place because I was worried that he would hurt himself.
Do you believe that there is anything I can do or will he walk when he is ready?
Posted by Flavour of the Day with Laura Haddad at Tuesday, December 06, 2011

He will walk when he is ready, my older son now 4 walked at 11 months, but i know other babies walk later. just try to help him by holding his hands and walk with him. just don't do it all the time, if he is not comfortable doing it don't do it.

Thanks for the tip!