Celebrating a Leader, a Colleague, a Friend

When I first met Hind back in 2011, I was immediately impressed by her professionalism, well-articulated vision and commitment to high standards of excellence. But, frankly, I wasn’t so sure that what I heard that day would be what I would see in action. We’ve all seen it before – grand ideas, impressive talk but all falling short of implementation.

Not only did Hind meet expectations, she surpassed them – but that wouldn’t surprise anyone who’s worked with her, including past colleagues from her days at the United Nations Children's Fund (UNICEF), the Baccalaureate School, The Jordan Times and Radio Jordan.

After joining the team as Editor of Family Flavours, I quickly discovered that Hind has an uncanny ability to convert mistakes into lessons and pressure into productivity. Despite the juggling act involved in owning a business and parenting four children, she keeps focused on the big picture (vision and strategy) while overseeing the details required to keep the team moving forward. She stays late with her team, washes her own mug in the office kitchen and acknowledges the creative outputs of others. And when we disagree, we do so with respect and move on.

Hind is also about breaking the mould and embracing diversity. She meets with heads of companies and dines with ambassadors but directs the same energy to ensuring public sector representation in articles, that subscribers in Hashmi Shamali and Abdoun are given the same priority and that the fashion editor looks for bargains. Hind supported the cancer survivor who graced the cover bald and the father of three who opened up about his depression after being diagnosed with diabetes.

While magazines typically Photoshop images to erase wrinkles, bulges and scars, Hind portrays families as they really are. When one fashion label expressed discontent over having their clothes worn by children with disabilities in a photo shoot, Hind remained true to her conviction of inclusiveness.

As I celebrate Hind’s birthday today, I am also reminded of Family Flavours' upcoming 9th anniversary (and Nakahat ‘Ailiyeh’s 8th). It was nine years ago that Hind had a vision to start the first (and currently only) parenting magazine in Jordan, where family remains the backbone of society. We’re savouring every moment of this journey and have Hind – and our devoted readers, clients and partners – to thank for it! 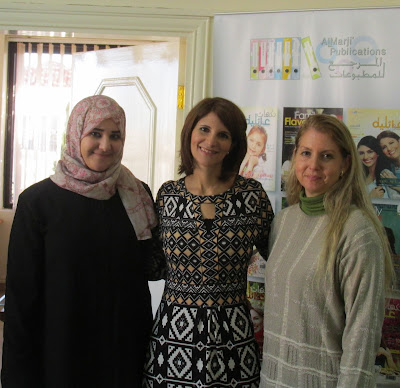 Posted by Flavour of the Day with Laura Haddad at Wednesday, July 22, 2015

that's an amazing inspiring story...good for you Hend...another amazing lady to look up to :)
http://omomaty.com/2015/07/22/نصائح-للسفر-مع-الأطفال/