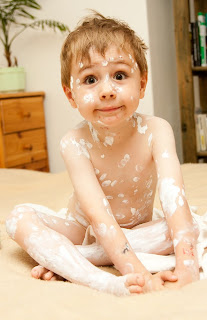 Chicken Pox
My son has what we believe are chicken pox. We are not so sure as he took the vaccine a while back and the spots that are appearing look like early stages of chicken pox without the itching. His doctor says that it is most probably it but will be definite by tomorrow depending on how it will develop.
That is not the problem, I mean if he gets it, it's better that it is now than later. My main problem is my one-month-old baby Mona. I'm so worried she will catch it at such a young age, it must be terrible for her. Yousef has touched her hands frequently for the past 2 weeks so there is a pretty good chance that she is already infected. I am trying to keep them as away from each other as possible.
However, my question is, if I carry Yousef and then her, can I transfer the infection? Her doctor said no, a friend of mine is sure I can.
Help!
Posted by Flavour of the Day with Laura Haddad at Tuesday, July 10, 2012