Flavour of The Day with Noora 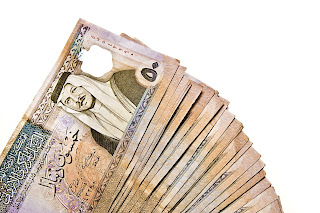 A while back, I was at a fund raising event at my step daughter's school. Standing by me at one of the toy booths were a mom and her son whom I am assuming is 9-years-old. While he reached out for one of the toys, his mother pulled him away and said:" we are not buying anything from here, it's cheap, if you want a toy I will take you to *******", naming one of the most expensive toy stores in Amman. I was shocked and thought to myself, "what a terrible thing to teach your child."
On the other hand, a few days ago, I was at a mini-market by my house and I over heard one of the most adorable conversations ever. A tiny voice that belonged to an adorable 5-year-old boy was negotiating his allowance with his father and saying:" if you give it to me now," referring to a half JD to buy a chocolate, "I'll pay you back tomorrow, because tomorrow is the day I collect my allowance from you." His father's reaction at first sounded evil but with time, became admirable:" you will just have to wait until tomorrow and learn not spend all your money before the end of the week." While he tried his best to negotiate, the father wouldn't budge and the boy seemed to really understand that his father was teaching him something.
I wonder which one of these two boys will grow to be successful and responsible!
Posted by Flavour of the Day with Laura Haddad at Tuesday, July 31, 2012

Hi Noora,
I think teaching your kids how to be resposible especially with money is one of the hardest things to teach. What I am doing with my tean age kids proved to be quite effective. About 4 years ago I opened seperate bank accounts for each one and I transfer their monthly allowance directly into their accounts.They all have ATM cards and pay for themselves for clothes, restaurants...ect. That taught them to be careful with spending, and the worth of what they buy.