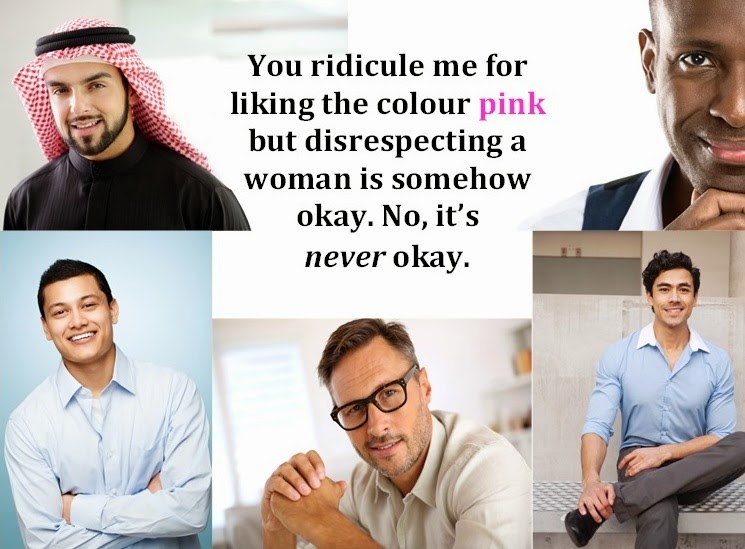 It’s okay to like pink when society says you shouldn’t. It’s not okay to disrespect any woman, even when society accepts it

On my way to running an errand last week, a uniformed guard whistled and snarled vulgar remarks. It doesn’t matter what he said. It’s how it made me feel.

Anger consumed me at first as I thought of him and so many others who don’t care how their snarky stares and lewd gestures make the recipients feel. I was walking in Amman, Jordan but I could have easily been in Berlin, Germany or in Washington D.C. in the United States. He was a guard but he could have easily been a CEO of a company or a frequent worshipper at a mosque or church. The likes of him are not confined to any particular culture or background.

But then I thought of what this man may be like outside the context of our brief encounter. After he was done with his shift, would he go home to a wife and children or to a loving mother and loving sisters? While he may be a jerk, or even abusive, I suspect that he actually treats his family members and loved ones with care and compassion, like so many men. He is probably well liked too by his colleagues and supervisors.

On my way home that day, all I could think about were my sons, one turning two end of March and the other seven in April. My attention shifted to them as I wrote this letter:

Today my priority as a parent is keeping you safe, happy and healthy – physically, emotionally, mentally and spiritually. My worries revolve around you, Shareef, running into the street or falling out of your highchair; and Omar, you not getting the stimulating, engaging environment you need to explore, learn and grow. Playdates are still manageable and your relationships uncomplicated. Letting you know that it's okay with your baba and I not to simply go with what everyone else is saying or doing means you don't have to hate red apples even if your classmates do, and you can like pink even when everyone says you shouldn't.

As each day goes by, and we find you teenagers in the blink of an eye, I know these questions and reflections can only multiply and deepen. I don’t know where your future paths will lead. With your tricultural background, your Jordanian-American-German upbringing could take you anywhere and lead you to anyone. But I certainly hope and pray that you’ll aspire to treat everyone with respect and be able to recognise when you’re not. This includes treating every woman with respect regardless of:

You don’t have to agree with her or even like her. You don’t have to befriend her, date her or marry her. But when your baba and I nurture in you to be loving, kind and respectful, it’s not selective. Regardless of whether you or anyone else deems her worthy, respect is what you owe her, even when it’s difficult or unpopular.

Here are a few posts/sites for further reading:

http://msmagazine.com/blog
Posted by Flavour of the Day with Laura Haddad at Monday, March 09, 2015