Bully in the Market 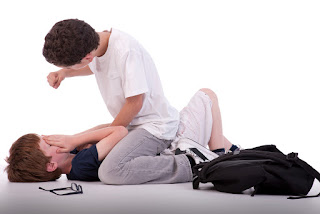 I hate violence. I hate toys, programs and games that promote violence. I do not buy Yousef toy guns, plastic soldiers or let him watch aggressive television. And when my husband is watching wrestling or some other kind of "violent sport", kids are not allowed to be in the room.

One of the sentences I hated was "if someone hits you, hit him." And for so long, I resisted teaching Yousef to respond in that manner. Yet, when we were at the supermarket and some random child who was initially playing with Yousef punched him in the chest with all his strength for no reason what so ever, I wished that my son had some pay-back violence in him.  Instead, he just politely smiled and stared at the child, trying to fight back his tears.

My heart shattered and tore and the mama instinct in me wanted revenge from this child who was barely reprimanded by his mother! When I think of this happening in a few more years when Yousef is ten and passively attacked by a bully, I get furious and pray to god that he will know how to fight back.

However, what is right here? We cannot rid the world of bullies even as young as two-years-old but if I teach Yousef to fight back and hit, how can I make sure he will not use hitting as a technique to get what he wants?
Posted by Flavour of the Day with Laura Haddad at Sunday, January 13, 2013